Leave a comment Posted by Accelerate Magazine on May 6, 2013 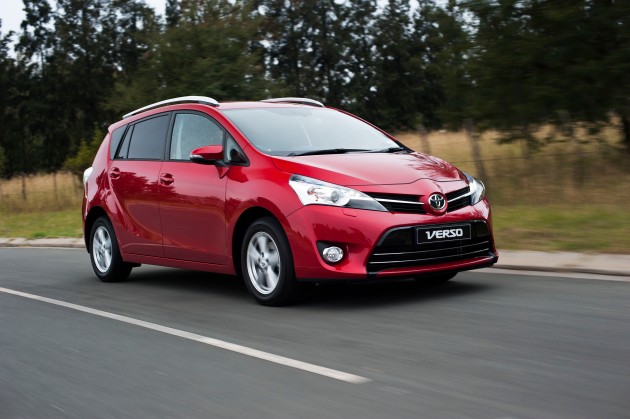 The aroma of soup emanates from my kitchen as I write this review. You know that familiar connection that the nose sends to the brain when all the senses start working together to cause the body to feel cosy and warm?  I guess that is what an MPV does for a family. You know, it’s not all exotic or particularly over-spiced, but rather a predictable sensation of familiarity. And what is wrong with that? When it comes to comfort, space and practicality, why force the issue with inappropriate vehicles for family comfort.

The new Toyota Verso is no longer the stereotypical “Mom’s Taxi”. And, being a working woman and mother, who hates being stereotyped; I am extremely pleased with the Verso’s definite move away from that image. The exterior, which exudes a more sophisticated appearance as a result of Toyota’s new design language, has a far more dynamic appearance than its predecessor.  Leek and potato soup now called Vichyssoise is what I am saying. It is practicality with a new sense of style.

The new Verso looks wider and longer but not quite offering the ride height of an SUV.  The front, lower grille is a larger trapezoidal set within a redesigned front bumper. The upper grille features a central, chrome plated horizontal trim bar which extends into the headlamp clusters.

The “family” launch of the Verso meant a drive from Johannesburg to Sun City. Always a challenge when travelling with my four children is space.  The Verso offers plenty of this. Extra storage space everywhere you look!  The seven seater combination offers a separate fold down for the three rear seats, so we merely left one up and voila, each child had loads of place to stretch out and not annoy each other.  The five bags packed neatly into the boot too. Look it was only a weekend away, so a longer holiday would have called for a trailer or the other two seats to be flattened.

From the driver’s seat the Verso offers a wide range of vision and offers a handy conversation mirror that unfolds above the rear view mirror.  I liked the leather steering wheel and the eye-pleasing ergonomics in the sophisticated black satin finishes and upholstery. I particularly like the sun shades on the rear doors for practical and safety reasons. All the expected safety systems are all included in line with Toyota’s standards.

I drove the 2.0-litre diesel and 1,8-litre petrol versions on launch. There is a definite reduction in engine noise with improved NVH in both the petrol and diesel variants. The new improved aerodynamics with airflow directed more efficiently over and under the vehicle makes for solid performance. The drive was seamless and enjoyable. The way a family vehicle ought to drive. No frills, no fuss, just good old wholesome broth.